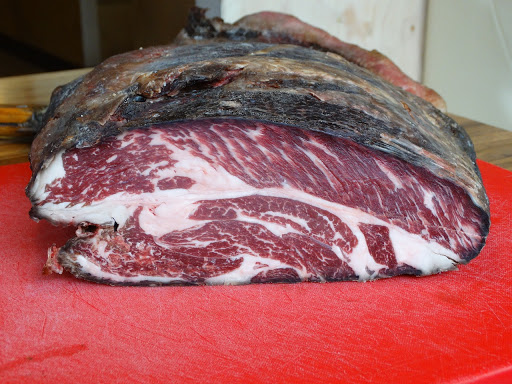 After slaughter, meat carcasses are hung to begin the maturation process. The amount of time that the carcass is hung depends on the type of meat and the butcher’s decision. Many meat retailers do not like to use the word hang that is why they call it dry-aged meat. However, in restaurants, dry-aging has a different meaning.

The differences between dry-aging, meat hanging, and curing

The processes of meat hanging and curing are as old as civilization. There were no refrigerators back then and storage of meat is difficult in warm and humid climates. Curing and hanging were developed separately by different cultures throughout history to preserve meat.

When meat is hung, the process is considered aging although there are fundamental differences in their application. The objective of hanging is to enhance flavour. A whole carcass or individual cuts can be hanged for less than a month at less than 40 degrees Fahrenheit.

The process of curing is for preservation and longevity. It involves salt and nitrates to add flavour and colour. Curing takes anywhere from several weeks to months and requires a cooler temperature of 40 degrees Fahrenheit. However, smaller cuts can be cured at room temperature.

Dry-aging of meat in restaurants is a more time and energy-intensive method and requires a proper dry-aging chamber with the right technology. Temperature and humidity are set to a certain point to prevent harmful bacteria from getting into the meat. Naturally-occurring enzymes will break down the muscles and fibrous tendons to make the meat more tender. In the controlled environment of the dry-aging chamber, a flavourful meat is created.

Recently, the process of wet-aging was introduced because of advances in plastic and refrigeration technologies. Meat from the butcher is packed into vacuum-sealed plastics before they are delivered to groceries. Wet drying occurs while the meat is in transit. However, wet-aged meat does not have the same flavour and tenderness of dry-aged meat. It also costs considerably less.

It is not suggested to dry-age individual pieces of steak because of the weight loss during the process. Moisture loss will cause the steak to shrink and there won’t be much left after the crust has been trimmed off. To ensure a properly dry-aged meat, it is important to have a perfect system that will control temperature, air-flow, and humidity.

For restaurants, the dry-aging chamber can be customized so that customers will know how their steaks are dry-aged before they are cooked. As you may have noticed lately, dry-aged steak is becoming very popular in spite of its high price. Food aficionados appreciate that extra concentration of flavour and tenderness that is missing in the fresh steaks that are grilled at home.